Cupcakes galore! Check out these scrumptious posts, fresh from the oven of the hottest cupcake blogs.
Feed created by feedshuttle
135

Oatmeal Cream Pies – Soft and Chewy Sandwich Cookies
Oatmeal cream pies are soft and chewy oatmeal cookies stuffed with a thick layer of vanilla frosting. They are right up there with Oreos as the best sandwich cookies! If you’ve ever had an oatmeal cream pie, it’s likely that it came out of a plastic bag from the grocery store or a gas station […]

Shirley Temple Drink – Simple Two Ingredient Kiddie Cocktail
A Shirley Temple drink is the perfect mocktail for kids. A Shirley Temple is so easy to make and the drink requires just two ingredients! I remember when I was a kid that my friends and I would order this cocktail from the bar every time we were at a wedding. Drinking Shirley Temples made […]

Loaded Funfetti Dessert Nachos
These dessert nachos have been fan favorites for many years! They are crunchy funfetti cookies with a meringue dip (you can use marshmallow fluff if you want to save time), diced strawberries, and chocolate chips. Get creative and add chocolate sauce, Nutella, caramel, or whatever else you can dream up! Touchdown! The dessert nachos are […]

Sesame Candy – Easy Gluten-Free Candy Recipe
This crunchy sesame candy is so easy to make! It’s a gluten-free candy sweetened with honey or maple syrup. You can add nuts for extra flavor and texture, too. What is Sesame Candy? Sesame candy is a gluten-free brittle-like candy made by heating sesame seeds and a sweetener together and then pouring the mixture onto […]

Coffee Desserts – How to Make Coffee-Flavored Cakes, Cookies, Cupcakes, and More
Coffee desserts – desserts that taste like coffee – are for true coffee lovers! Learn how to make the best coffee-flavored cakes, coffee cookies, coffee cupcakes, and more! While crumb cakes designed to be enjoyed with coffee are wonderful, sometimes you want the coffee flavor in the dessert itself. There are four ways that I […]

Ciao, Gloria: New Project by Renato Poliafito
Renato Poliafito, who co-founded Baked, is opening up a new cafe in Brooklyn. It will open up in Prospect Heights and featured classic desserts. Support his Kickstarter!

Women's History Month cupcakes at Sprinkles, plus shamrock and Flaming Hot Cheetos cupcakes
Sprinkles Cupcakes, which has locations across the United States, is selling four limited edition Women's History Month white chocolate raspberry cupcakes this March, starting today, March 4, and ending March 24. They have three different sayings celebrating women and girls. From March 4 to 10, they're selling a pink cupcake that says "Who Runs The World? Girls" and from March 11 to 17, they're selling a cupcake that says "She believed she could. so she did." Then from March 18 to 24 they're...

Cupcakes in jars by mail from Brooklyn Cupcake via Goldbelly
Yesterday I got a wonderful surprise when I opened my front door to see a huge box from mail order food company Goldbelly! It was from a friend who I did a favor for, and inside were these adorable cupcakes in jars by bakery Brooklyn Cupcake. Goldbelly offers 13 different flavors of these cupcakes by mail. What my friend didn't know is that while I live in New Jersey now, I used to live in Williamsburg, Brooklyn, within walking distance of Brooklyn Cupcake (they also have a location in...

Fun strawberry hi hat cupcakes by Molly Yeh
Molly Yeh is a cookbook author (Molly on the Range) and host of Girl Meets Farm on the Food Network. If you've watched the show, you know she loves sprinkles, among other foods. Well, she made these strawberry hi hat cupcakes (click over to her blog to see more photos, and has the recipe for them over at Betty Crocker. They're filled with jam! Don't they look delicious?

Beautiful and delicious Pittsburgh Chatty Cupcakes plus Automated Cupcake Machine
I had the pleasure of being given a gift of four cupcakes from custom baking company Chatty Cupcakes in Pittsburgh, Pennsylvania. In addition to custom orders, they also have an automated cupcake machine (ACM) at the Galleria Mall in Mt. Lebanon, Pennsylvania. The machine was made in Italy and features Wi-Fi Inventory and LCD touch screen and is stocked with fresh cupcakes. Has anyone tried this machine? It sounds like the perfect break during a day at the mall! Here's a news story about its...

Cheesecake Business for Furloughed Workers
One of the food news stories related to the Trump shutdown is the incredible work of Jose Andres' World Central Kitchen. Another food story is about these two furloughed workers who started a cheesecake business. Via Essence.com"Orders for the coveted cakes now come with a 2-3 week delivery time. And what used to be a home kitchen operation is now a production ran out of an official kitchen that allows The Furlough Cheesecake owners to triple their output. Rest assured that even with the...

Business For Sale: Dollop Gourmet
View this post on Instagram A post shared by Dollop Gourmet Frosting (@dollopgourmet) on Nov 27, 2018 at 12:28pm PST I met Heather Saffer when I was invited up to Rochester to speak at a small business conference several years ago. Since then, she has authored a few cookbooks and appeared on Shark Tank. Now, she's selling her business.For Cyber Monday week, we’re holding the wildest sale of all… and that is the sale of our entire business! Yes, that’s right, the whole business. At a crazy dirt... 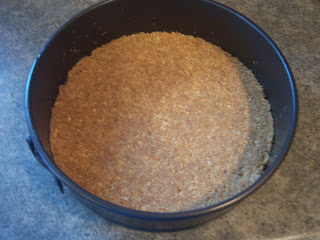 Sorry for the lack of posts lately. I haven't made any cupcakes since the red velvet ones I made a couple of weeks ago. I did make a vanilla bean cheesecake that I am going to share with you instead because it was delicious!The crust after being baked. Slicing the vanilla beans. Scraping the vanilla beans into the batter. The finished cheesecake! Graham Cracker Crust:1 1/2 cups graham cracker crumbs1/4 cup ground pecans1/4 cup sugar1 tsp cinnamon6 tbsp melted butterIn a bowl, mix together the... 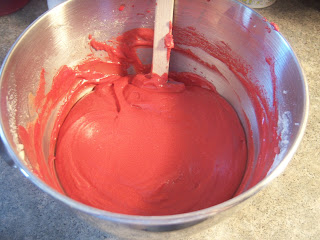 I have to admit that I have never made nor tasted a red velvet cupcake. Sad, I know... So I decided to make some today and they are scrumptious.The batter, isn't it pretty?Ready to be baked.Just out of the oven. They look beautiful.The final product.Red Velvet Cupcake1 1/2 cups sugar1/2 cup butter, room temperature2 eggs, room temperature2 1/3 cups flour2 tbsp cocoa powder1 tsp baking soda1 tsp baking powder1/2 tsp salt1 cup buttermilk1 1/2 tbsp red food coloring1 tsp vanilla extract1 tsp... 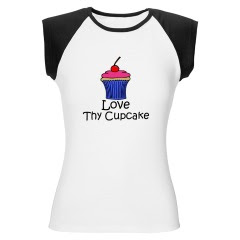 I love cupcakes so much that I thought I'd try designing a couple cupcake t-shirts... check 'em out!Cupcake T-ShirtsCupcake Onesies... and more! Cheers,Sarah 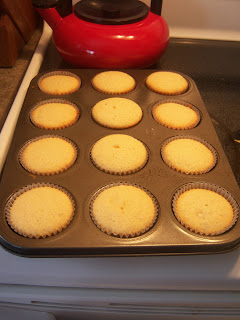 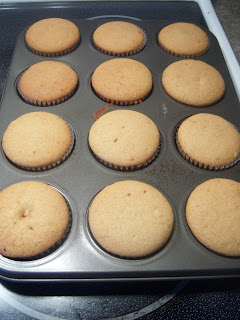 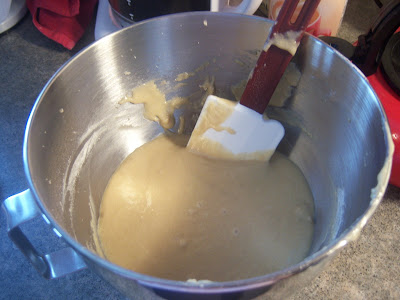 I have never had a harder time making cupcakes, well I guess it was the buttercream. I got this recipe from howtoeatacupcake.net. You can click here to get the recipe.The cupcake batter. The recipe called for dark brown sugar but I didn't have any. I used light brown sugar and they still turned out great.Caramel drizzle for buttercream. This is were I had all my problems. I am a little embarrassed to admit this because I went to pastry school, I made caramel a ton in school! The first time I...

Just A Recipe...
I didn't get around to making the caramel cupcakes with caramel buttercream today. May be tomorrow.While searching the internet for cupcake things today I came across something interesting, A Cupcake Camp. Who knew there was a cupcake camp? I would love to go but it is in San Fransisco and Toronto. The one in San Fransisco was in early December. But if you want to attend the one in Toronto it is being held on January 25th from 2-5. It is held at Labspace Studios at 2A Pape Ave. For more... 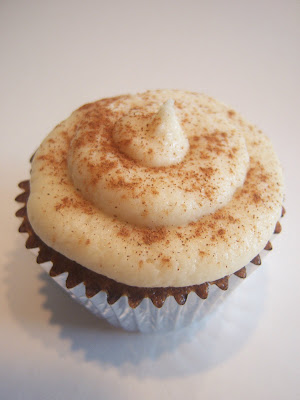 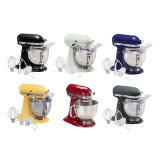 Kitchen Aid Artisan 5 qt. MixerThis is definitely an essential for any type of baking. I use mine almost daily. It may seem kind of expensive but it is well worth the money.New Beater Blade for 5 qt. MixerThis beater blade looks awesome. It has rubber edges that constantly scrape the bowl. That means no more stopping to hand scrape the bowl and it eliminates batter build up on the blade. I don't have one of these yet but I can't wait to get one. Baker's Secret 12 Cup Cupcake PanYou can't make...

This book is awesome. I just got it, so I haven't made anything from it yet, but it has a ton of great ideas. They all look fairly easy because they use all kinds of candy to decorate them. My favorite cupcake from this book has to be the penguins. They are so cute! I am going to make them first. I will post pictures as soon as I make them. Just Cupcakes is a great book for beginners. It has 100 recipes that use box cake mixes and adds various ingredients to make cupcakes like Spiced Pumpkin,...